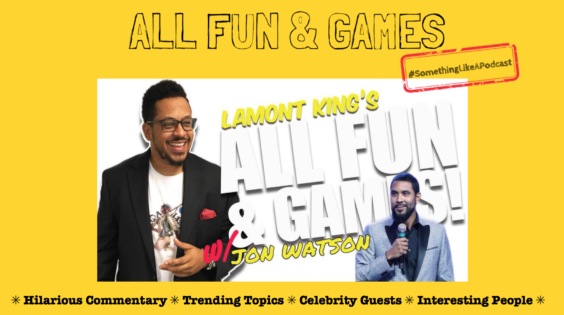 Something like a podcast, AF&G brings you hilarious commentary, trending topics, celebrity guests, and interesting people in a way that is refreshingly entertaining.

Lamont was known as “Lazee Lamont” on a nationally syndicated morning radio show for many years, but he is far from a slacker. His cynical and irreverent persona complimented his nonchalant demeanor. His on-air skill at improvising, celebrity impressions, and original characters made for a hilarious mix of thought-provoking observational humor, and side-splitting act-outs.

Lamont’s stand-up style is very unique. With a clever yet conversational flow, he effortlessly switches from deadpan one-liners to hilarious storytelling. Lamont toured as an opening act for the legendary comedian Bruce Bruce; has written for George Wallace, J. Anthony Brown, The Rickey Smiley [TV] Show, The Tom Joyner Morning [Radio] Show; is an alumnus of the National Lampoon’s Lemmings Sketch Comedy Troupe; co-starred in the movies Love For Sale and Something Like A Business; and has appeared on Comedy Central, SpikeTV, Starz, and BET. For nearly 4 years he was a regular on-air contributor for News One Now with Roland Martin, which aired on TV-One. He currently can be heard weekly co-hosting The Karen Hunter Show on SiriusXM Urban View 126.

Jon has always been a fan of comedy and talk radio. Being a huge fan of the Howard Stern Show, he always revered the moments of the show that seemed to be spontaneous and smart. The ability of the cast of characters to develop content on the fly is what he felt was most entertaining. As fate would have it, he became a regular caller to the Howard Stern Wrap Up Show. The show’s producers invited him into SiriusXM studios as a guest of the Wrap Up Show because they enjoyed his calls so much. To his surprise, he wasn’t going to be just a guest of the show but they asked him to co-host the episode with Jon Hein, as Gary Del’Abate (Baba Booey) was out that day. This is when he officially caught the bug for broadcasting.

Jon continues to be a regular caller to the Stern spinoff as well as many other shows including The Godfrey Complex, The Karen Hunter Show, and The Heather B Show. He was able to make his name and voice recognizable by asking questions of value and being able to contribute to the conversation with the studio talent. Although he does not have formal training, Jon has become a fast learner in live broadcasting. He is quick-witted and opinionated, which allows for him and Lamont to have great exchanges that are well received by their audience.