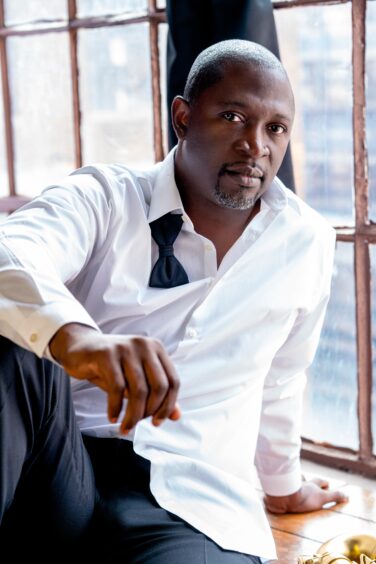 Preparing food that is not only great tasting, but presented in an exquisite way is the job of a great culinary artist. Using various ingredients, they insert their creative talents & their visionary eye, coupled with the right dose of seasoning to execute a delightful dish that satisfies our palate. Saxophonist Mike Phillips utilizes those same creative gifts to curate a show full of amazing music seasoned with engaging stories, in depth interviews, fun facts and more. He takes us on a musical journey where we are sure to enjoy a potent, but perfect mix of music and news that quenches our insatiable hunger for great music. With over 20 years in the industry, Mike has a musical repertoire that allows him to help cultivate our love for music while enlightening us on our favorite artists.

Perhaps such a penchant for aurally delving deeper has everything to do with the particularly wide musical frame of reference that comes from an early fixation on all things music taken in from his surroundings from a very young age. Born during the onset of the hip-hop generation to parents who fully encouraged his affinity for music, young Mike sampled multiple instruments before officially embracing the saxophone.

After making an impromptu debut at New York City’s Wilson’s nightclub in 1993, MIKE PHILLIPS not only became a regular presence at various open-mike jam sessions in Manhattan’s live music scene, but soon thereafter found himself scoring session and sideman work within jazz, R&B and hip-hop circles. Quick-fast word-of-mouth earned him a fast-spreading reputation that managed to catch the attention of the owners of Hidden Beach recordings, who quickly signed him and put him on the road opening for then label-mate Jill Scott in 2001.

With noted, successful releases like 2002’s You Have Reached Mike Phillips, 2005’s Uncommon Denominator and MP3 (2010), received well by music critics and audiences alike, Mike simultaneously found himself amidst musical greatness when he was entrusted and embraced as saxophonist for music icons Prince, Michael Jackson and Stevie Wonder. Having more than paid his dues and proven a most comprehensive student of the masters, his quest for creative freedom is fully realized on his harmony-riddled lo-fi-hip-hop-meets-jazz-funk re-imagining of the spin Craig Mack classic “Flava In Ya Ear” (swapping out the rap posse for an R&B posse boasting Stevie Wonder/PJ Morton/Raheem DeVaughn/Naturally7/Eric Roberson/Leela James/Avery Sunshine, Trombone Shorty, Keyon Harrold & Blu2th).

The MIKE PHILLIPS sound in general, in full-circle fashion all boils down to…authenticity. “The Mike Phillips sound is a connection to the root of the things that I consider my experiences,” he clarifies. “So what I have to do is make sure that the experiences of the core of my culture – hip-hop, jazz and R&B – and understand the history behind it. So my sound is truly different because it’s an honest connection to a culture I’m fascinated by and that I will always represent in its full form. I’m a student of the game. I played and worked for Michael, Stevie and Prince. If I can’t be a student, then I’m wasting all the time that I spent with them learning.”