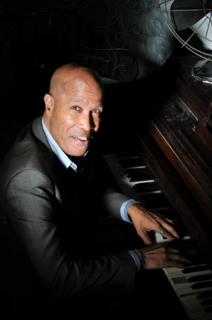 2018 marks the 30th year since pianist, composer, and author Bob Baldwin first released, “I’ve Got a Long Way to Go.” That led to a chance meeting with his heroes Roberta Flack and Herbie Hancock at a Sony Innovators ceremony in Beverly Hills, where he was selected from over 300 applicants and achieved an eventual signing to Atlantic Records by legendary music executive, Sylvia Rhone. In addition to working with artists like Phil Perry, Will Downing, Lenny Williams, Marion Meadows, and DC’s own Lori Williams, Bob has released over 25 albums, and started the Smooth Jazz radio show “NewUrbanJazz (NUJ)”.

Baldwin started in radio after acquiring a degree in Business Administration with a Communications minor. Prior to graduating, he interned with the legendary Frankie Crocker at WBLS in New York while developing his solo recording career. In between recording, he also focused on overseeing the Brazilian-American Jazz Festival, The Croton Point Park jazz Festival, The Wednesday WindDown Jazz Festival, and the Trumpets Jazz Series. In 2010, Bob and the staff of NUJ curated the NewUrbanJazz at the Arts x Change music series, the “Westchester Musicians for Haiti,” and “Jazz for Haiti” programs in Newark, NJ, a partnership with the Red Cross of Northern NJ. Bob is also the author of the music biz e-book: “You Better Ask Somebody (Staying On ‘Top of Your Career in the “Friggin’ Music Business)” which was released in 2011.