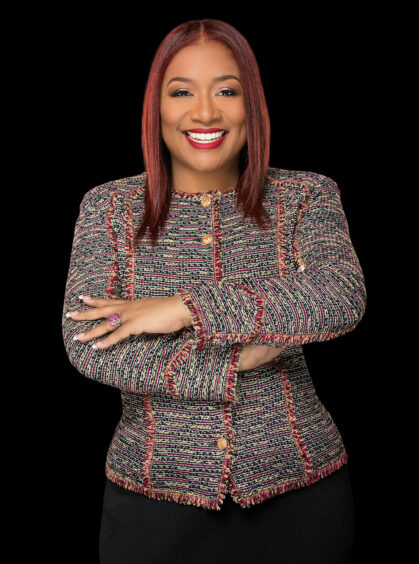 “Engaging,” “empowering,” and “encouraging” are a few words to describe this 30-minute experience hosted by Dr. Nicole Mason. Understanding the need to create a “safe space” for trailblazing women, this show is an extension of the work that Dr. Nicole does with high-achieving women. If you are a woman working in a male-dominated field or an African American woman working in a “majority” environment, this show is designed specifically with you in mind. Guests will offer strategies for success, how to deal with micro-aggressions, understanding unconscious bias, and more;  but more importantly, how to rise above the fray with excellence! You will leave every episode ready to “Show Up Great, Speak Up With Confidence, and Stand Out With Courage”.

Born with a spirit of advocacy, Nicole knew at the age of 9 that she wanted to be a lawyer. Having what she felt was the “gift of gab,” Nicole would speak up for those that either wouldn’t or couldn’t speak up for themselves. She has carried this same energy into her adult life. In addition to her advocacy, Nicole is a bold, courageous, and confident woman on a mission to help other women live life and achieve success on their own terms. She is a two-time graduate of Howard University, having earned Bachelor of Arts and Master of Divinity degrees. She also earned a Juris Doctor from the University of the District of Columbia David A. Clarke School of Law and a Master of Law from the George Washington University School of Law. She also has a Leadership Coaching Certificate from Georgetown University and is a member of the world renowned International Coach Federation (ICF).

Growing up as an only child and working in her grandmother’s dry cleaning business, Nicole is an astute businesswoman. Her grandmother pushed her to go after her dream of becoming a lawyer, but when it came time for her to apply to law school, she applied nine times and was rejected nine times. Yes, you read that correctly. She was rejected nine times. She would not take no for an answer. She applied the 10th time and was accepted. Upon entering the orientation, some of Nicole’s classmates gasped for air. They were shocked and surprised to see Nicole big, round, pregnant, and starting law school! She graduated on time with her class and passed the bar exam. Nicole is the owner of a boutique law firm, Mason Legal Group, LLC, where she specializes in Estate Planning. She also operates a coaching and speaking business, Strategies For Success, LLC. She is intentional about using her skills, talents and gifts in the earth and to be a blessing to others.

Sensing the call on her life to preach the Gospel of Jesus Christ, Nicole quit her job and immersed herself in her studies at Howard University School of Divinity. During her tenure, she was selected to serve as the Faculty Research Scholar for the esteemed Old Testament Professor, Dr. Gene Rice. Nicole was also the recipient of more than $20,000 in scholarships while matriculating at the Divinity School. Nicole is a licensed and ordained Minister in the Mount Calvary Holy Church of America Organization, under the leadership of Bishop Herbert C. Crump and Lady Dawn Crump. She serves at her local church assembly, Greater Mount Calvary Holy Church, under the pastoral leadership of Archbishop Alfred A. Owens Jr., and Dr. Susie C. Owens.

Nicole has always spoken her truth and has been a trailblazer in her career. She has served as the first and only African American to serve in her position of an Equal Employment Opportunity/Diversity and Inclusion professional for her organization. She has been the recipient of many awards in this capacity and continues to blaze trails in her industry. She has worked in this area for more than 30 years.

Nicole started her ministry, SISTERGRAM Ministries, in 1998 with a newsletter and a circulation of approximately 125 women in her then local church. In less than 2 years, the newsletter circulation had grown to more than 2,000 women across the country and in various prisons. Nicole has used her gift of writing to encourage women over the past 20 years. She was honored and recognized in October 2018 by the Governor of Maryland with the prestigious Governor’s Citation for her work with women and the impact she has made over the years.

In addition to her writing gift, Nicole held a monthly fellowship for women for 12 years, ministering to more than 1,000 over that time period. She has also hosted a weekly prayer call for the past 15 years and continues to do so today. Nicole has hosted her own international online show reaching viewers around the world. She also hosted her own radio show on Urban One (formerly Radio One). She is an international best-selling author having written 4 books of her own and serving as a contributing writer in more than 25 book projects. She is the recipient of the prestigious 2018 50 Great Writers You Should Be Reading Contest. Her very first anthology was the 2019 Anthology of the Year presented by the Indie Author Legacy Awards in partnership with Black Enterprise Magazine. Nicole was also a finalist for Female Author of the Year and a finalist for the Reader’s Choice Award in 2019. Her books have been highlighted in several countries: South Africa, South America, Australia, and the Netherlands to name a few. She is also a monthly contributing author for several magazines. Nicole was also selected as the 2019 ACHI Woman of the Year. She was also selected as the #SpeakerCon Faith-Based Speaker of the Year for 2019, the first person to receive this prestigious award. Most recently, Nicole’s writing was published in the Chicken Soup for the Soul® Miracles & Divine Intervention: 101 Stories of Faith and Hope.

Nicole is a mentor and a leader’s leader serving as coach and confidante to many high achieving women in ministry and the marketplace. Women look to her for spiritual guidance and Godly wisdom for everyday living. She is an Executive Leadership Coach serving women leaders in the marketplace. She holds a Bachelor of Arts in Sociology from Howard University, a Doctor of Jurisprudence from the University of the District of Columbia David A. Clarke School of Law, a Master of Law Degree in Litigation and Dispute Resolution from the George Washington University School of Law, and a Master of Divinity from Howard University School of Divinity. She also has a Certificate in Leadership Coaching from Georgetown University, and she is a Certified Speaker, Trainer, and Coach with the John Maxwell Team.

Nicole is an Ambassador for the American Heart Association, turning her pain into purpose. Having lost her mom to heart disease and being diagnosed shortly after her mother passed away, Nicole has been very intentional about spreading the message to other African American women about heart health awareness. Nicole was featured in a commercial sharing her mom’s story, which was seen on more than 12 media outlets, in various magazines, newsletters and on jumbotrons at various airports. Nicole has spoken at numerous conferences, both sacred and secular, including: the Success Women’s Conference held in Biloxi, MS (alongside Lisa Nichols and other notable speakers and influencers); Washington Suburban Sanitary Commission (WSSC); Women In Business Conference; American Mothers National Conference; and Federally Employed Women’s National Training Program, to name a few. She is a world changer destined to help women “Show Up Great, Speak Up With Confidence and Stand Out With Courage!”