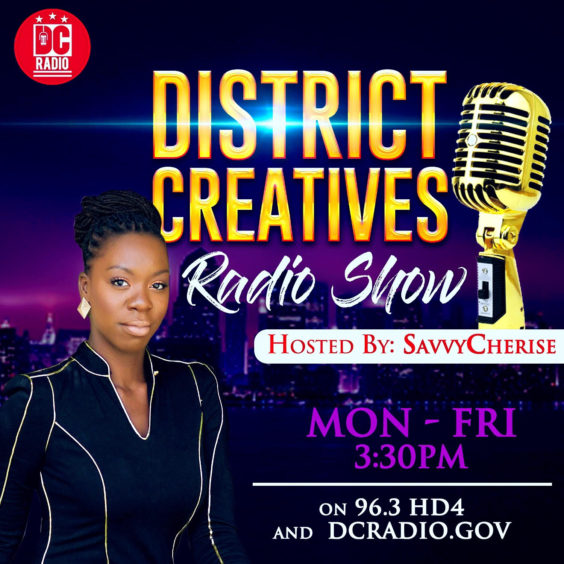 The District Creatives Radio Show is a 30-minute program featuring interviews highlighting the work of millennials/young adult creatives in the city. The focus of the content is arts, entertainment, and the creative economy. “The District Creatives Radio Show” provides a platform for creatives to share the work and content they provide in this city and for the city. Hosted by District creative, Savvy Cherise, the show will create a dialogue around the joys and pains of pursuing your passion, resources for District creatives, and balancing your passion project with your paycheck. These discussions will not only highlight current creatives but also guide the next wave of creatives in the District of Columbia.

Cherise Mattheson is a savvy young professional with a strong desire to inspire and empower through service. Cherise is a graduate of Frostburg State University and the University of Michigan, where she studied social work and urban planning. During her tenure at the University of Michigan, she founded an after-school program, D.E.L.T.S. (Developing and Empowering Ladies of Tomorrow’s Society). The cultural and social enrichment program provided activities surrounding self-esteem and community service to help troubled girls at a Detroit public school strive for excellence and believe that they are beautiful. During that experience, she found her true passion.

After receiving her master’s degree, she was selected to serve as a Capital City Fellow with the District of Columbia Government. In addition to serving as a fellow, she also completed a one year leadership training program and received a certificate from the George Washington University Center for Excellence in Public Leadership. After assuming the role of Social Media Manager for Raise the Bar, a professional organization for young women ages 18-30, she launched SavvyCherise.com as a tool to inspire people to pursue their passions and live their dreams. Keeping inspiration and empowerment as the focus of her blog, she sought out interviews with people who were already living their dream. She has interviewed countless dignitaries and celebrities, including Russell Simmons, Taraji P. Henson, Mary J. Blige, Ne-Yo, Ledisi, Keyshia Cole, Brandy, Rick Ross, T.I., SWV, Rebbie Jackson, the late Dick Gregory, and the Late Dr. Dorothy I. Height.

In 2010, Cherise was hired as Social Media Manager and Blogger for EZ Street, a DJ and on-air radio personality for 93.9 WKYS. In 2011, she was selected as Co-host and Social Media Correspondent for the “Trending With EZ” show. She served in that role for five years and documented the journey in her book, “The Dream Vision Reality Guide”.

In addition to being a mother, entrepreneur, social worker, and author, Cherise is an active community servant and a member of several ministries and organizations that include Delta Sigma Theta Sorority, Inc., and Union Temple Baptist Church.